Appendix N Review: The Tower of the Elephant 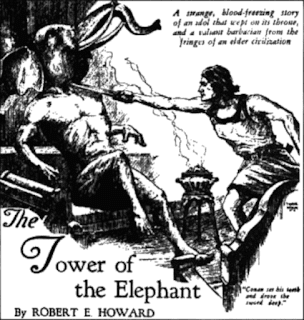 In a rowdy section of the “City of Thieves” in sweltering Zamoria, a young Conan stalks the streets seeking adventure. In a tavern, he hears a Kothian slaver talking about a fabulously valuable jewel: the Heart of the Elephant, which sits in the mysterious Tower of the Elephant in the heart of the city. It is the treasure of the sorcerer Yara, and all who have tried to enter the tower have met with horrible death.

Desiring to be the first to succeed, Conan gets the information he desires from the fat slaver, tensions flare and in a brief tavern brawl, the slaver from Koth lies dead on the floor and the Cimmerian stalks toward the tower.

Sneaking into the tower, Conan finds another intruder, Taurus, the self-proclaimed “King of Thieves.” Deciding that two heads are better than one, the two join forces and infiltrate the sinister tower. 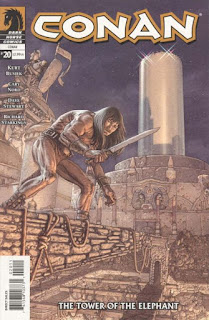 Appearing in the March 1933 issue of Weird Tales, The Tower of the Elephant was published two months after The Scarlet Citadel. Here, Robert E. Howard takes a different approach to the first two Conan stories by going back to his barbarian hero's past. Years before taking the throne of Aquilonia, young Conan is a wandering thief in a foreign land that has barely heard of Cimmeria. For his part, Conan doesn't know what an elephant looks like either, aside from knowing it has a tail on its face. The perils within the Tower are suitably perilous, and the solutions are clever and exciting, particularly how Conan and Taurus deal with several deadly lions that guard the garden at the base of the tower.

Its a good story, and short. It hits all of Howard's strengths (action, tension, descriptions of the exotic, dark humor, etc) and while a little more straightforward than The Scarlet Citadel (which I think is a slightly better story) is still absolutely recommended and worth reading.

So go read it, because the next part is going to cover BIG spoilers. 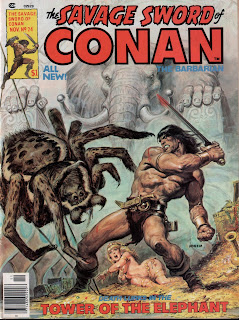 This is the story where Conan meets a space alien. Yeah, that's plenty Weird Tales right there. Trapped inside the tower is an ancient, blind, green-skinned humanoid with a giant elephant's head. Yag-Kosha, or Yogha, as he calls himself (he uses both names), is from the distant planet Yag, and he was part of a group of exiles who flew to Earth on great wings. On Earth, the Yagians slowly died out, their wings atrophied to nothing and unable to leave, with Yag-Kosha the last survivor.

Having watched humans arise over centuries, he was eventually befriended by Yara, whom he taught many powerful secrets. Yara betrayed him, and imprisoned him, and now he sees Conan as a chance at escape. And revenge. 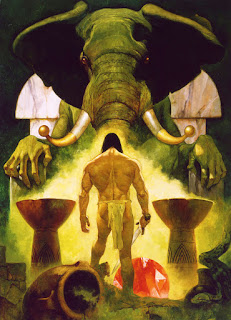 Naturally Conan is confused as hell, but his solution is to accept the situation as-is. Yag-Kosha is a funny-looking weirdo, but he's a nice guy, and clearly in misery. Conan's sympathy (and dislike of slavery) makes his decision for him. He'll help the elephant-man, even if it means losing out on the jewel.

As in The Scarlet Citadel, this crude kind of virtue is what sets Conan apart from later pastiches. When the chips are down, Conan actually does the right thing, as opposed to the profitable thing, even if the results don't go quite as he intended (doubly so when magic is involved). Conan always gives off the impression of a coiled spring ready to jump, but his decision-making process is what sets him up as a fully heroic character. The weirdness and violence he finds himself surrounded by is just icing on that cake. 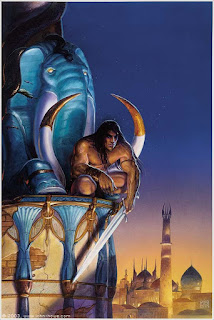 This was one of the first Conan stories I read, and the one I recommend that newcomers read first. You're right about Conan's instincts, and the contrast with the pastiches.