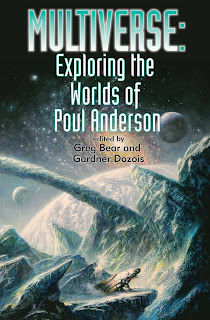 So. The state of Modern Sci-Fi/Fantasy is a wasteland of dreadfully dull Pink Slime. This is known, and a huge part of why sales have slumped dramatically over the last 20-30 years.

And today I read a reminder why.

Multiverse: Exploring Poul Anderson's Worlds is an anthology book published in 2014 in tribute to the late, great Poul Anderson (who passed away in 2001, thirteen years before the anthology). Edited by prolific author Greg Bear and prolific anthology editor Gardner Dozois.

The second story of the anthology is ostensibly a tribute to Three Hearts and Three Lions by veteran Alternate History author (and friend of Anderson's) Harry Turtledove, titled The Man Who Came Late (a title tribute/pun to a completely unrelated Poul Anderson story called The Man Who Came Early).

In it, thirty years have passed since the events of the novel. Alianora has settled down in a modest village with her modest blacksmith husband, and had three modest children (a fourth died in infancy). One day, while she spends several pages getting a bucket from the town well and reminiscing about the lost past, a muscular older man rides into town and recognizes her.

It is Holger Carlsen, and after thirty years of searching across the multiverse, he has finally returned to her. They have an awkward reunion where he meets her family and then they have dinner and discuss things and Holger works through his realization that the woman he spent thirty years' wandering the multiverse to return to has moved on, and then he walks into a dimensional wandering tavern to speak with Morgan Le Fay (one of the primary villains of the novel) and...that's it.

The introduction to the story describes it as “bittersweet” but there is no sweetness here. There is no magic either. No Middle World. No Elfland. Oh sure, the magical white tunic that allows a maiden to transform into a swan is passed down to Alianora's daughter Alianna, and there is the Old Phoenix tavern that appears and disappears, but there's no real magic.

Alianora's world is reduced to a mundane village. There are no monsters to slay. No elves. No werewolves. No dragons. No dwarves. No nothing.

Everything that made this alternate world unique has been stripped away piece by piece.

Alianora's accent disappearing is hand-waved as she changed it to accommodate her village. Never mind that EVERYONE in this world spoke that way. (I suspect its a way to excuse not putting in effort to write the accent, which if so, why even bother to write the story in the first place?)

Alianora hasn't traveled far from her village since the novel, nevermind that she was a child of the woods with no roots who wandered freely as a friend of the Middle Worlders and beasts.

People are surprised at Holger's Christianity, never mind that Christianity was ubiquitous in the novel where a sword powered by literal Jesus Magic saved the day. But no, we must be secular.

At least Alianora gets a content ending, if not a happy one. Holger gets it far, far worse.

He rides in as a Quixotic figure in blue jeans and flannel. Despite having wandered the multiverse for 30 years. He gave up smoking because SMOKING IS BAD FOR YOU, KIDS DON'T DO IT. Never mind that the pipe he had was a memento of the loyal dwarf Hugi, who GAVE HIS LIFE for Holger's quest. He is cold and prideful, where he was once a compassionate lunkhead, and quick to think about using his sword when Alianora's husband gives him the side-eye. He patronizingly calls Alianora “Babe” several times, despite never once using that word in the novel. Then when he meets her pretty daughter Alianna, he begins to fixate his attention on her in a creepy old man way.

Then, after an evening of talking, he goes into the wandering Old Phoenix Tavern (from another of Anderson's stories, A Midsummer Tempest where Holger had an appearance) to meet with Morgan Le Fay, one of the primary villains of Three Hearts and a woman Holger had a complete and total break with at the climax of the novel, despite their previous relationship history. The nods to other Anderson works are clever, but that's all they are, and are the only flashes of magic in the story.

Holger and Alianora's whole encounter is about her trying to let him down gently, even though he spent the last 30 years adventuring across worlds trying to find her again. 30 years moving forward through peril because of her. And instead of love, Turtledove calls it “pride.”

Holger isn't Holger anymore. That character has been assassinated and replaced with a miserable old fool.

And the point of the story is apparently to show how the world treats a hero a generation after his war and how the world moves on. The story lets you know this by literally putting “Yes, that was the point,” in Alianora's mouth when Holger comes to this conclusion.

In short, everything about the world and characters that made them unique and loveable, from the magic to the culture to the weirdness to Holger's blockheaded goodness, are stripped away and replaced by stewpots, housework, and boring people living boring lives. Faerieland and the forces of Chaos have been replaced by something far more sinister: “Realism.”

Its a dozen or so pages of boring people talking. Then the next morning, Alianora asks her daughter for the white tunic again. Alianna agrees.

THAT'S FUCKING IT. THIS STORY IS A PIECE OF SHIT.

There is that too.

I know I'm in no hurry to check his stuff out now.

Boy, that's depressing. Thanks for the warning.

I just remembered that its been 25 years since I've read anything by Harry Turtledove (since Guns of the South in 1993). This sort of thing is probably why.