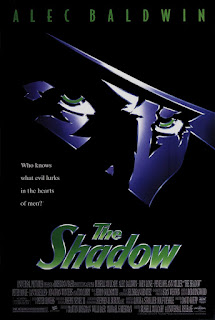 Russell Mulcahy (the director of Highlander) adapts Walter Gibson's pulp hero The Shadow, with Alec Baldwin in the title role as Lamont Cranston. The plot centers around Shiwan Khan (John Lone), last surviving descendant of Genghis Khan, and powerful mystic, arriving in New York with a dream to conquer the world. The plot involves something about a bomb, but honestly that gets lost in the shuffle.

Still, the cast is very solid, with Penelope Ann Miller, Peter Boyle, Ian McKellan, Tim Curry, Jonathan Winters, and a small cameo from James Hong. A solid adaptation of the Shadow, it hits on a lot of character beats and traits like Margo Lane, the network of agents, his dual .45s, even his sinister long-nosed appearance when he's in full Shadow costume.

There's some origin stuff about Cranston being an opium kingpin in Asia at the start before beginning his mystical journey which is completely unnecessary and Shiwan Khan's plot feels like it loses cohesion along the way (I want to conquer the world, but I also want to blow up New York City!). The good outweighs the bad, however, and it hits all the right notes on the Pillars of ADVENTURE.


Crazy pulp elements: Khan's goons wear armor and run around 30s NYC with crossbows and swords. A flying, intelligent CGI dagger with a bad attitude. Shiwan Khan smuggling himself to the US in a coffin just so he can mind control a security guard into killing himself. Actually, most of what Shiwan Khan does. He's pretty fun. 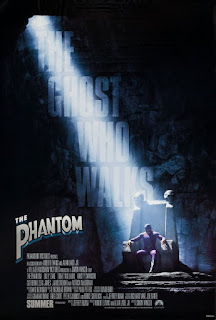 Another 90s adaption of a pulp hero, Lee Falk's hero The Phantom was directed by Simon Wincer (Free Willy, Quigley Down Under, several episodes of The Young Indiana Jones Chronicles). The plot centers around Kit Walker (Billy Zane) as a two-fisted masked avenger who prowls the African jungles as the Ghost Who Walks having to deal with an American businessman and gangster, Xander Drax (Treat Williams) who's searching for several mystical crystal skulls scattered across the world that will give him unlimited power. And can shoot lasers. Mostly lasers. Knowledge was their treasure, you know.

Again, the cast is very solid, with Kristy Swanson, Catherine Zeta-Jones, James Remar, and Patrick McGoohan in key roles. Pacing is great, location shots are lush, and the physical stunts and effects are pretty incredible. Zane's also really charming in the lead role. It gets a little odd when the Phantom has conversations with the ghost of his dead father that only he can see, but its an excuse to have McGoohan on screen, so I don't mind as much. The Shadow nails the glitzy and grimy aesthetic of 30s New York, but overall The Phantom is a little more fun and the plot holds together tighter.

Crazy Pulp Elements: An all-female squadron of flying pirates. Xander Drax throwing a spear through a man at a meeting in his office. A trapped microscope stabs out a man's eyes. Phantom's horse and wolf clearly communicating with each other to figure a way to get him out of a scrape.


It turns out the pseudo-Pulp revival thing from the 90s was actually pretty good. Both of these movies are solidly entertaining, have heroic heroes, villainous villains, beautiful women, handsome men, exotic locations, tight pacing, and meaningful peril. They're not relevatory or what you might call “modern classics,” but they're leagues better than most modern dreck passing itself off as Action-ADVENTURE.
Posted by K. Paul at 8:38 PM

"but they're leagues better than most modern dreck passing itself off as Action-ADVENTURE."

Exactly. Not classics, but entertaining enough that I can watch them over and over again. Much better than the dreck we get today.

Precisely. I was struck by the base level of film making quality (plot, pacing, characterization) that's absent from a lot of modern actioners.

I've only seen "The Shadow" (1994), but I remember liking it a lot, and wondering why it wasn't more appreciated.

As you state, it was not a classic, but a solidly entertaining 90's action movie far better than the average of its era and genre.