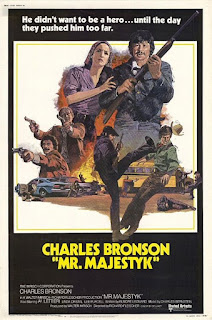 1974's Mr. Majestyk is a curious little early action film that's largely been forgotten, despite having a reasonably large pedigree.

It was written by pulp western and crime novelist Elmore Leonard.

And it was directed by big picture filmmaker Richard Fleischer, who directed 20,000 Leagues Under the Sea, Soylent Green, Fantastic Voyage and, uh, Conan the Destroyer.

Its about a grumpy Vietnam veteran with a criminal record who now owns a melon farm in Colorado. All he wants to do is bring in his harvest for the year, but fate seems to have it out for him.

Sounds like a Steinbeck novel about the plight of the working class and death of the American Dream, right?

Wrong. This is Bronson we're talking about, not Tom Joad.

After a confrontation with a small time shakedown scheme, Majestyk gets arrested on bogus charges. During a stay in prison, he meets mob hitman Frank Renda, played by gangster character actor Al Lettieri. The two hate each other immediately.

When the mob tries to spring Renda during a prisoner transfer, a firefight with the cops ensues. In the chaos, Majestyk grabs the keys to Renda's handcuffs and drives off with him in the prison bus. Renda tries to cut a deal, but Majestyk has other plans.

He wants to hand the hitman over to the police in exchange for dropping the charges against him so he can go back to his melon farm. It doesn't work out as planned. Renda escapes and boy is he mad.

The good news is that the charges against Majestyk got dropped. The bad news is that Renda's out to kill him. The best news is that he can go back to his melon harvest. On one condition: That he act as bait to lure out Renda.

The harvest is brought in successfully. He starts up a relationship with migrant worker and union activist Nancy Chavez (Linda Cristal). He helped her out at the beginning of the movie and hired her group.

Renda makes his move, but Majestyk's not at home, so the mobster settles for the next best thing: destroying the melon harvest with sad violin music playing over it. I swear it makes more sense in context.


What follows is a very satisfying road to revenge. Its got shootouts. Its got an old Ford pickup barreling down perilous mountain trails with Bronson bouncing around in the flatbed shooting a shotgun. Its got ramp jumps. Its got a car going over the side of a cliff and exploding. Its got Bronson jumping through a window blasting away with his shotgun.

There's a few nods to the labor disputes of the early 70s, but at its core, its basically a libertarian western. The man just wants to get his harvest in and make some money, and the cops do nothing except get in the way of that.

Everybody else in the movie thinks he's crazy, since with all the madness going on, his main fixation is the melon harvest. But in context, it makes sense. Its his livelihood and independence on the line, and he'd be ruined it he couldn't sell the crop. Even the melon massacre works in that context. The hero and villain both understand the symbolism of the crop.

There are some slower parts here and there, but Leonard's script keeps things building nicely.

It may not be his finest work, but at the end of the day, its Charles Bronson kicking ass for a hundred minutes. What more do you need to recommend it?

Mr. Majestyk was name-dropped in True Romance. I searched it out at that point. Cool flick.

I remember this movie. Not a big blockbuster. A good, enjoyable time. We need more of them.