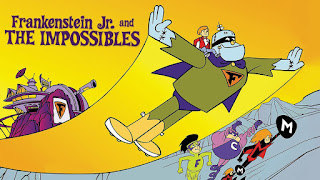 Superheroes were big in 1966. The decade had started out with DC Comics revitalizing their superhero stable with new versions of the Flash, Green Lantern and more. Meanwhile, the publisher formerly known at Timely and Atlas comics renamed itself to Marvel and cemented its own legacy with The Fantastic Four. Batman got a revitalizing shot in the arm with a live-action TV series. The Fantastic Four and Spider-Man would get cartoon shows in 1967, but between then was Hanna-Barbera.

Founded by Tom & Jerry creators William Hanna and Joseph Barbera in 1957 as H-B Enterprises, became Hanna-Barbera Productions Inc. in 1959, and had a knockout success in 1960 with The Flintstones. The studio then cranked out a staggering number of successful (or at least memorable) shows from Yogi Bear to The Jetsons to Jonny Quest.

1966 would see Space Ghost (created by DC Comics veteran Alex Toth), which would usher in a new blast of creativity from Hanna-Barbera with subsequent superhero shows like Birdman and the Galaxy Trio and Mightor. Space Ghost had a solid visual design and mixed super heroics with teen sidekicks, space opera, and a funny animal sidekick, which helped set the formula for the company's more “realistic” shows down the line.

But there was another Hanna-Barbera superhero show that was produced in 1966 and aired on CBS. Sharing a September 10 air date with Space Ghost, Frankenstein Jr. and The Impossibles was a curious double billing of super hero comedy. A total of 18 thirty-minute episodes were produced over two seasons, and the show was split up into two parts.

The Impossibles were a musical trio of musicians inspired by mod fashions and 60s rock and roll that became a trio of superheroes who fought silly villains. 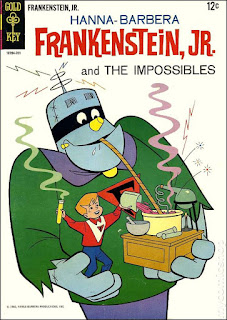 Frankenstein Jr. on the other hand, was the invention of boy scientist Buzz Conroy (and his father Professor Conroy) who controlled a giant, friendly flying robot with an energy ring and together they fought mad scientists and monsters.

That sure sounds an awful lot like 1964's Gigantor, but there are notable differences. 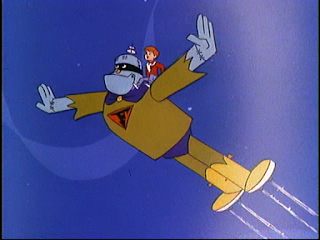 Rather than simply taking cues from Frankenstein, Franky is a giant, friendly looking robot Frankenstein's monster with a domino mask and a cape. Franky also has more than just his fists at his disposal, including a number of useful gadgets.

There's not a whole lot to discuss about the show, considering its overall short episode length. Its cult status ensured occasional the occasional home video release and an appearance in the 2016 crossover comic Future Quest, which was a mashup storyline where numerous Hanna-Barbera heroes like Jonny Quest, Space Ghost, the Herculoids, and Frankenstein Jr. had to team up to stop a villain that threatened the world.

The show IS notable, however, for its cast. Aside from diminutive voice actor Dick Beals (who made a career of voicing kid characters including Buzz on this show) and the Impossibles being voiced by tremendously prolific voice actors Paul Frees, Hal Smith, and Don Messick, the show was a breakout voice acting gig for Frankenstein Jr's voice actor: Ted Cassidy. 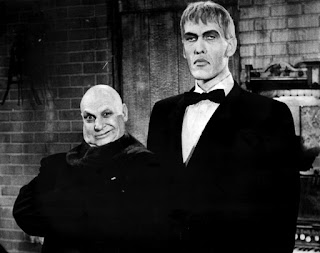 Does this ring any bells?

Already famous as Lurch (and Thing) on The Addams Family (1964-1966), Cassidy's huge size and huge voice made his portrayal as Lurch an icon, but the show ended in 1966, and he became a regular voice actor for Hanna-Barbara throughout the rest of the 60s and 70s (among other acting gigs including several appearances on the original Star Trek) until his untimely death from surgery complications in 1979 at the age of 46.

On the next episode of Shin Super Robot Sunday: Yokoyama returns.