Last year, I took a look at the state of some of the big pop culture franchises and where they stood. Since it was my most successful blog post by a magnitude of hundreds, why not revisit my apocalyptic predictions one year on?

Ready Player One? It came and went. Nobody seems to have any feelings about it one way or the other. It pushed some nostalgia buttons and was promptly disposed of.

The Marvel Cinematic Universe had a strong year, with Black Panther and Avengers: Infinity War doing really, really well. Ant Man & The Wasp happened too, which I guess did all right. I don't know, I didn't see it. Kevin Feige's contract is now being reported as being up sometime in 2019 now, so he's at least going to be around until Avengers 4. Beyond that, its looking murkier. They've announced that the Eternals and Shang-Chi are getting movies, which is cool and all, but all the press about it is how the its “The First Asian blahblah” and “The First blahblah of color to direct a blahblah.” This is not how you advertise these projects. You advertise The Eternals as “Jack Kirby Snorts Cosmic Angel Dust And Drew This” and “Shang-Chi Stars In: DEADLY HANDS OF KUNG-FU.” 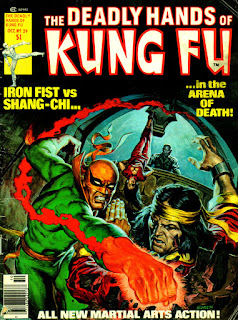 THIS IS HOW YOU ADVERTISE A SHANG-CHI MOVIE

Meanwhile, Captain Marvel is setting itself up as the wokest superhero movie in town with how the media slavers over how Brie Larson's wooden expression is greatest thing in the world. If/when the MCU begins its death spiral, I'm going to go ahead and predict it'll be a lukewarm reaction to Carol “Can't Keep an Ongoing Series Going” Danvers. And if you don't like it, you're a sexist bigot who hates women and lives in your mother's basement.

Over at Netflix, there is no Marvel presence. The “Marvel Knights” shows (I refuse to call them the Defenders on principal. There's no Namor or Silver Surfer.) came and went with mixed results, but everyone loved Daredevil. Well, now that's canceled, leaving Jessica Jones and Punisher to ride out their season twos. Presumably, this is being done to make way for Disney's own streaming service, but the Daredevil move pissed off a ton of people.

On the print side of Marvel, its still a dumpster fire.

The DC Cinematic Universe crashed and burned with Justice League. Henry Cavill is out as Superman. Ben Affleck is out as Batman. Justice League bombed so hard that Warner Brothers reshuffled their movie division.

On the other hand, the Wonder Woman sequel looks solid (but is getting pushed back to a 2020 release), and Aquaman and Shazam! (that's the ORIGINAL Captain Marvel, to you kids) all look promising and are still on track to release next year.

Over at the print division, DC had a good thing going with Rebirth, and they have promptly destroyed that in order to follow Marvel's lead. Following stunt issues that put individual Superman and Batman issues at the top of what sold this year, both series have suffered heavy declines. Marvel big name Brian Michael Bendis jumped to DC this year and was put on Superman, shaking up Clark Kent's family and infuriating fans of the previous Super Sons series. Superman books are down beyond Action Comics 1000. Batman was left at the altar by Catwoman and sales are down in his books as well (though not as much). In the wider DC Universe, “Heroes in Crisis” went with a Shock Event where a bunch of beloved characters like the Wally West Flash (there's a lot I can say about how they've treated Wally over the last decade, but none of it is polite), Roy Harper/Arsenal, and Poison Ivy were all killed. Dick Grayson got shot in the head so bad he don't brain too good anymore and calls himself Rick Grayson.

It seems DC has played one shock event too many, and people are getting fed up enough to leave.

Star Wars is seeing a massive implosion. The Last Jedi was so bad it created a cottage industry of people talking smack about it. Even now, its sitting at a 45% Rotten Audience Score on Rotten Tomatoes. Solo: A Star Wars Story, released hot on the heels of the reviled Last Jedi, is the first flop in the franchise's history. Star Wars is in big trouble, and Episode IX, due out in 2019, has to deal with the script and audience goodwill mess left behind by Rian Johnson. The only thing left of the Star Wars cash cow is the moo.

Also, this happened. Maybe don't go off on profanity laden rants when you're attached to a family-friendly all audiences franchise.

The Walking Dead lurches toward its finish line without any actual plan. Telltale Games, the developer of the successful adventure game spinoff, abruptly closed down this year, leaving the episodic game in a lurch mid-production. Since then, Skybound Entertainment (the brainchild of Walking Dead creator Robert Kirkman) has picked up the slack to finish the series.

The action game of the series, Overkill's The Walking Dead is apparently a very bad game and sold so poorly that it effectively killed Starbreeze Studios.

Meanwhile, TV villain Negan is coming to the Tekken franchise. For whatever reason.

Back over at Disney, they're still hell-bent on cranking out live-action remakes of better movies because they're creatively bankrupt. Reaction to the Live Action* Lion King trailer has been mostly mockery, and audiences seem to be catching on to Disney's blatant grab for their Nostalgiabix. Sentiment seems to be turning against these remakes, finally.

But not before an Emma Stone Cruella De Vil Prequel!

Game of Thrones' final season is supposed to come out some time in 2019, but following GRRM's lead, may be delayed.

Speaking of GRRM, he's got plenty of time to talk about New York City pizza. He's a busy man, so stop bothering him about when Winds of Winter is coming out.

Fantastic Beasts: The Crimes of Grindlewand is making money, but performing less than its predecessor and sitting with poor critic reviews and okay audience reviews. Harry Potter fatigue seems to be setting in for real now, beyond the “READ ANOTHER BOOK” chant.

I hate to say “I told you so” but screw it. I called it last year. The bastions of corporate Geek Culture™ are all collapsing before our very eyes like its the ending of Fight Club.

It's a good time for indie games. The book market is shifting in that direction, I think, too. It's harder to tell with TV/film, but at least there's a lot more content out there now, a lot of it free on YouTube.

An excellent rundown of the state of pop culture. Given that we have no meaningful high culture that matters anymore, this stuff is important!

And . . . it looks like its custodians are failing, and failing badly in each medium examined (Pixies playing in the background optional). Thank goodness for the Internet and its ability to give independent creators a chance to bypass the gatekeepers and get their stuff out there. Viva la revolution! It can't come soon enough.