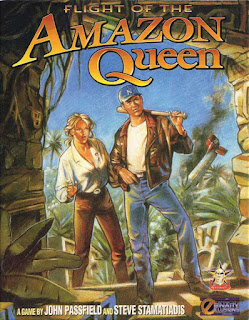 Since I'm on a point-and-click adventure kick, let's discuss another forgotten title from the 90s.

1995's Flight of the Amazon Queen is a LucasArts style adventure game released for MS-DOS and the Amiga not made by LucasArts. Instead, this was the product of a small Australian studio called Interactive Binary Illusions. Their previous game was 1993's well regarded action platformer Halloween Harry (later renamed to Alien Carnage) co-developed with SubZero Software and published by Apogee back in the Duke Nukum (not a typo) 1 & 2 days. Led by by John Passfield and Steve Stamatiadis and released by British publisher Renegade Software, Amazon Queen was Interactive Binary Illusions' second, and final game. 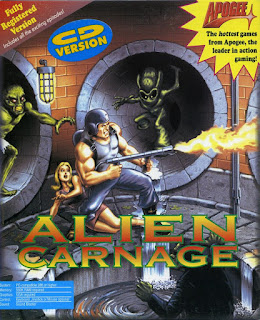 It was not the end for Passfield and Stamatiadis, who would form Gee Whiz! Entertainment in 1996 and produced two games, Zombie Wars (a sequel to Alien Carnage) and Mike Stewart's Pro Bodyboarding (a sports game about bodyboarding. Professionally) before the studio joined with Robert Walsh to form Krome Studios Pty Ltd. In 1999. 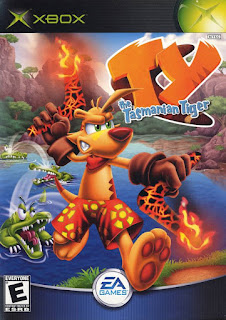 Krome would release a number of licensed titles during the PS2/GameCube/Xbox era, but also handled the first 2 games of the Spyro the Dragon reboot and developed an original mascot platformer of their own: Ty the Tasmanian Tiger. In 2006, Krome acquired Melbourne House Studio, which had once been prolific 8- and 16-bit console game developer Beam Software, and renamed the studio to Krome Studios Melbourne.

Financial troubles shut down Krome Melbourne in 2010, but Krome revived in 2012 with new games in the Ty the Tasmanian Tiger series (and subsequent remasters), and recently handled remaster duties for The Bard's Tale Trilogy and Wasteland Remastered, both for inXile Entertainment. Passfield left the company in 2005, but Stamatiadis is still with Krome, as far as I can tell.

The reason for the history lesson is because 1) its neat, and 2) it means Flight of the Amazon Queen is an early step in a lengthy and respectable career for the Aussie developers, who are still kicking around. As for Amazon Queen itself, the game's prologue starts at the 11th hour of 1949 and clicks over to 1950. WWII has been over for a while, and dashing pilot-for-hire Joe King has a gig to fly blonde film star Faye Russel into the jungle for a photo shoot. Misfortune strikes and his plane, The Amazon Queen, crashes in the jungle, and Joe finds himself swept up in the schemes of Floda, a lederhosen company that's a front for the totally-not-a-Nazi-scientist-hiding-in-Brazil Dr. Frank Ironstein, who's mad goal is to transform Amazon warrior women into dinosaurs so he can take over the world. To do that, he needs to rescue Azura, the beautiful princess of the Amazons.

I say “LucasArts style” because the comedy runs deep in this game and there are no dead end fail states like the “Sierra style.” The adventure itself is inspired heavily by Indiana Jones, with Joe as a fast talking, baseball loving chad of an adventurer with a mechanic sidekick named sparky. There's also jet packs, dinosaurs, the Grim Reaper, zombies, an Abbott & Costello reference, a gorilla who shouldn't be in South America and he knows it, and a crystal skull plot macguffin 13 years before Indiana Jones touched on the same concept. This is a game set in the Pulp era and embraces it wholeheartedly, and the pulp elements aren't played for laughs, either. The amazon princess is even a redhead, as is traditional for the pulps. 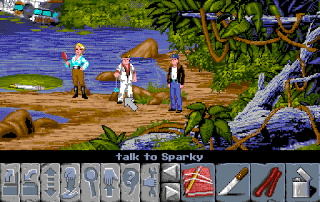 The interface is fairly standard for adventure games of the era, with context buttons and a mildly annoying inventory. The puzzles aren't too squirrelly by 90's adventure game standards, and the trial and error system is pretty forgiving. There is a little too much going back and forth, and some of the screens only have one or two things to interact with.

Contemporary reviews were hard on the graphics, calling them dated, which I don't agree with. They might not be as strong as contemporaries like King's Quest VII or Full Throttle, but the art is clean, the backgrounds are great, and there are some really nice animations. The lighting on Joe even changes as he walks under trees, which is a great touch.

The audio stands out even better. The main theme is really solid, but its the voice cast that really shines. A glance at IMDB shows a list of professional actors with solid careers as secondary and character actors. The biggest name of the cast is William Hootkins, who played Jek Porkins in Star Wars (and had a long career in voice work as well). The cast is fantastic. They've got the right balance of self-aware camp and earnest Gee Whiz attitude for a story about a German scientist turning women into dinosaurs.

I can't say enough nice things about Flight of the Amazon Queen. It's solid pulpy fun with an earnest sense of humor that clearly loves its source inspirations and doesn't overstay its welcome. I liked Lure of the Temptress, but I loved my time with Amazon Queen. 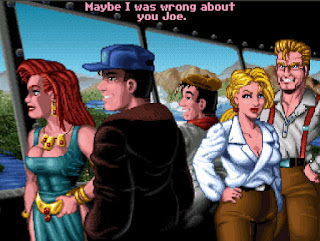 The game was released as freeware in 2004 and runs just fine in the ScummVM emulator, so you have absolutely no excuse to play it. Because if you don't want to see the hero kiss an amazon princess on an airship flight into the sunset after watching a giant crystal skull powered robot punch a giant dinosaur man in the face, then Kingdom of the Crystal Skull is over thataway.