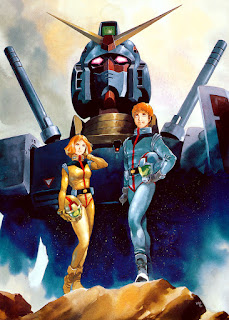 Going with this image because Sayla is best girl of the show.
BEST. GIRL.

Hello there, long time no see. Blogging output stalled out for a while, partly because of (positive) changes in work schedules, and also because I've been forging ahead on a pulp novel time permitting. So reading classic SF/F has kind of dropped off for the moment.

But in the name of “research,” I went back and watched Mobile Suit Gundam all the way through.

Mobile Suit Gundam aired on Japanese television in 1979 and birthed a brand new sub-genre of giant robot fiction: the “Real Robot.” Where the 60s and 70s had a thriving “Super Robot” field populated with classics like Tetsujin-28 Go, Mazinger Z, and Getter Robo (worthy in their own ways), Yoshiyuki Tomino's Gundam treated giant robots less as giant superheroes calling out their attacks, and instead as advanced weapons of war against a backdrop of space opera and large scale warfare. More Space Battleship Yamato meets Starship Troopers than Giant Robo/Johnny Socko and his Flying Robot.

In this house we respect Daitarn 3

This isn't a knock on Super Robots. I actually prefer them, to be honest, but Real Robots are damn good too, and Gundam stands at the top of that heap.

Except it wasn't always so. The show was initially a failure, and low ratings led to early cancellation and a mad dash to finish the series at 43 episodes with a dwindling budget. It wasn't until reruns, a compilation trilogy of animated movies in 1981, and perhaps most importantly, the introduction of plastic model “Gunpla” kits in 1980 that transformed Mobile Suit Gundam from a flop to a mega franchise. As far as 40 year old science fiction franchises go, its as important as Star Wars, equally as merchandised, and actually in a much healthier state, currently. (Yes, a holding pattern without much innovation IS healthier than a dumpster fire rapidly bleeding long-time fans).

Back to the show itself: The year is 0079 of the Universal Century. Mankind has set up multiple large space colonies as a unified Earth Federation takes control. One group of Colonies, collectively called Side 3, renames itself to the Principality of Zeon, declares independence from the Federation, and declares war. In rapid succession, nuclear and biological chemicals are heavily used, and Zeon achieves early dominance in space thanks to newly developed mechs called “Mobile Suits.” Oh yeah, and Zeon gassed a neutral colony, killing everyone on it, and then dropped said colony onto Earth, hoping to destroy the Federation's capital. Instead it destroyed a giant chunk of Australia.

This backstory all happened in about 8 months. 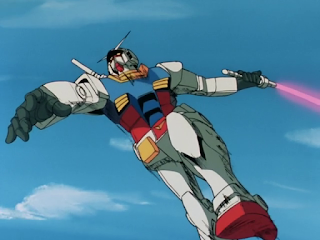 The show picks up at the Side 7 colony, where the Federation's top secret Project V mobile suit development is taking place. Amuro Ray, the teenage son of one of the head engineers, is thrust into the cockpit of his dad's mobile suit, the RX-78-2 Gundam, when two Zeon scouts get ahead of themselves and try to destroy the Federation facility.

Stumbling his way through his first couple of fights, Amuro is effectively forced into a combat pilot role alongside the crew and civilians of the carrier White Base, and the makeshift crew:

Bright Noa: A naval ensign forced to take the burden of command when the original captain is fatally wounded.

Mirai Yashima: The daughter of a wealthy family whose father died early in the war, who's glider training makes her the best suited to take the helm.

Hayato Kobayashi: Amuro's neighbor and friend who's more grounded but less talented. He becomes the pilot of the Guntank, a clunky artillery mobile suit. Think Krillin before Krillin.

Kai Shiden: An abrasive, sarcastic, cowardly loner who gets drafted into a combat role almost against his will. After some significant character development, Kai becomes the second-most dependable pilot on the ship, operating the Guncannon mid-range artillery mobile suit.

Ryu Jose: A stocky pilot cadet and the only combat pilot on the White Base with any actual training to start with. Not a particularly good pilot, but he does his best to keep the crew together. Bounces between a Core Fighter and co-piloting the Guntank.

Sayla Mass: A mysterious blonde girl who's the sister of Zeon ace pilot Char Aznable (oh we'll get to him in a bit) who becomes one of the most well-adjusted members of the crew, first on the bridge, then as a combat pilot in the G-Fighter. 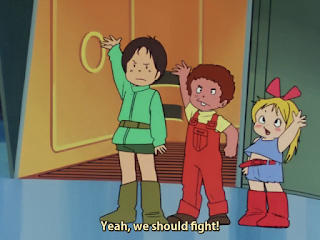 Except these three. These kids are the worst.

The show follows the White Base as it fights its way to Earth, then across the Earth, then back to space as the Federation rallies for an offensive against Zeon's territories. People change, important, likable character die off dramatically, and Amuro grapples with the toll the war is taking on him while he grows as a pilot and eventually awakens as a Newtype (a kind of step in human evolution adapted for living in space that, in practical terms, gives heightened spacial awareness that gives Newtype pilots a significant edge against “Oldtype” pilots, but when ramped up dramatically turns into Acid Trip levels of SPAAAACE MAGIC).

While Zeon's status as the aggressor in the war makes them the default bad guys, the show goes to great lengths to make both sides human. The White Base crew are clearly good guys, but the Federation as a whole is bureaucratic, slow to react, and impersonal, with a few heroic standouts like Matilda, Wakkein, and Sleggar “CHAD OF CHADS” Law. Most of the lower level Zeon troops are decent people fighting for their country and trying to survive. Some, like guerilla warfare/moustache expert Ramba Ral are downright tragic heroes. Even the ruling family of Zeon, the Zabis, isn't all bad. Supreme ruler Degwin Zabi compares his tyrannical son Gihren to Hitler when he tries to scold him for his cruelty. Vice-Admiral Kycillia is a manipulative ice queen. But Admiral Dozle Zabi is a loving father and a soldier's soldier who's only real flaw is his fierce pride, and Garma Zabi is a naive fop at worst.

And then there's Char Aznable. 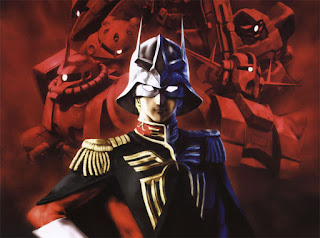 Building off of a previous Tomino character, Prince Sharkin from Brave Raideen, Char is a dashing masked enemy ace pilot and a viewpoint antagonist who initially comes across as a Red Baron type. But while loyal to Zeon, he's plotting a secret revenge against the Zabi family, for he is Casval Deikun, the missing son of the late Zeon Deikun who founded the Republic of Zeon and who died of sudden and mysterious circumstances allowing Degwin to take over.

Amuro's a good guy trying to do right by the world and his friends, but Char is a deeply compelling antagonist with all kinds of nooks and crannies of character development to dig into. Part heroic war hero, part revenge-driven madman, Char's such an effective character that he's become an archetype. Every subsequent Gundam series has its own variation of a Char Clone: a mysterious, often masked ace pilot who has his own code and agenda that he follows. Char is easily one of the best villains in all of anime. 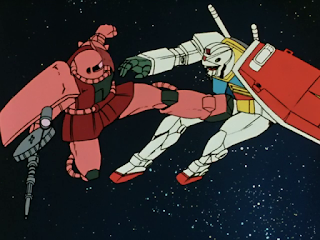 But here I am talking about the effects of Mobile Suit Gundam and not about the show itself. Its good. Very good, actually. The characters are likable and compelling. The mech designs range from iconic for the Gundam and the Zaku II to the adorably goofy like the Zakrello and the Guntank. The action works well too, considering the late 70s made-for-TV budget, especially the Battle of Jaburo, Battle of Solomon, Duel in Texas Colony (yeah, really), and the Battle of A Bao Qu being major standouts. The animation also nosedives in a lot of places near the end as the show had to wrap things up. Even the pacing is largely solid, with the worst patch being the stretch between the Garma arc and before Ramba Ral shows up. Those episodes have a lot of drawn out filler as Amuro mopes around feeling sorry for himself and going AWOL a couple times.

Beyond just being an Important Show For Anime, Mobile Suit Gundam is genuinely entertaining, and I do recommend it. 43 episodes of a late 70s anime might be asking a bit much, but that's what I hear the compilation movies are for (even if they cut out a ton of stuff like the Texas Duel). Either way, its worth a watch.
Posted by K. Paul at 9:57 PM

The new origins show is pretty great. I am only on episode 4 but I am already a Char fan. And the big doofus Zabi general is great too.