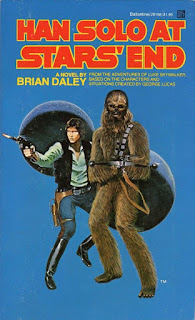 Han Solo at Stars' End is the second ever Star Wars novel. Published in 1979 by Del Rey, one year after Splinter of the Mind's Eye and two years after the original movie, this was a book of firsts. The first Han Solo-centric novel (the smuggler doesn't even appear in Splinter for reasons I covered in that review), it takes place before A New Hope and follows Han and Chewie's criminal escapades in a new location, the Corporate Sector.

Brian Daley (1947-1996), was a new author in 1979, having published his first novel, The Doomfarers of Coramonde (a story about US soldiers in Vietnam being transported to a fantasy world, which frankly, sounds like a blast) and its sequel, The Starfollowers of Coramonde in 1979. Daley was young, new, and pulpy, and it shows in Stars' End.

The book starts with Han & Chewie running guns for a group of oppressed laborers. Then they almost get impounded for not having the right kind of registration for the Millennium Falcon to operate in the Corporate Sector, and then they get swept up in a search for a missing outlaw tech named Doc who can help with the registration problem that turns into a murder mystery covering up a totalitarian prison on the edge of the galaxy known as Stars' End. 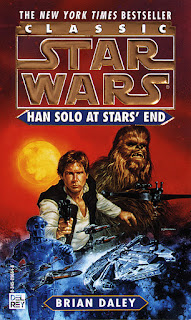 It may not be pulp in the traditional sense, but its a short book and whips from scene to scene with barely any fat. Han Solo as he is here is a committed rogue, scoundrel, and selfish jerk. When he pays back a loan shark named Ploovo Two-For-One, he adds in a vicious little exotic pet that jumps out of the box and attacks Ploovo. He doesn't accept the missing persons' job for free, doing it because he needs to get the Falcon's registration fixed.

Yet there's flashes of the hero he will become. He gives free advice to the aliens he smuggles guns to in the beginning. It takes some prodding from some of the characters, but he sticks it out with the search for Doc.

The new characters are well handled. Jessa, Doc's outlaw tech daughter is a talented tech and fighter pilot in her own right who can match verbal barbs with Han. Atuarre, the Trianii (cat people) ranger looking for her missing husband is a solid warrior woman kind of character who has very personal stakes in the mission. Rekkon, the academic who's much more capable of adventuring than a mere professor would seem is the only true idealist here, and he's a fantastic mentor for Han as somebody who knows to prod him in the right direction. Also, Rekkon's arguably the first important black character in Star Wars, and he's intelligent, cunning, and heroic. 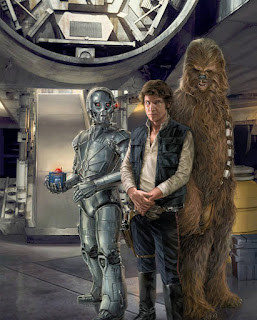 The real standouts are the droids Bollux and Blue Max. Blue Max is an eager little super computer who's amazing at technical feats but has the personality of a child and can't move around by himself. Enter Bollux: a positively ancient labor droid with a laconic personality and Southern drawl who's chest cavity is transformed into a housing unit for smuggling Max. They're fantastic.

The set pieces work out great too, including a fantastic dogfight that introduced early swing-wing versions of Z-95 Headhunters to Star Wars. The escape from the agriworld of Orron III by stealing and reprogramming a harvester droid is great. The climactic prison break at Stars' End ends up with Han blasting the entire station into low orbit and then having to find a way to escape before it comes crashing back down. Its awesome. What's more impressive is that it manages to capture a strong Star Wars feel without the Force and the Empire (well, there's a reference to the Imperial Entertainers' Guild, but that's it). If there's any real complaint I can think up is that aside from the Corporate Sector Authority's heavy-handed bureaucracy, there's no real meaty villain until they reach Stars' End.

In 1980, comics veteran Archie Goodwin (who helmed much of Marvel's Star Wars ongoing comic) and Filipino artist Alfredo Alcala adapted the story to a newspaper strip, which was later collected and printed by Dark Horse in 1997. The technology doesn't always match up with descriptions (Z-95s are described as having swing-wings and the comic doesn't portray them as such, so continuity wonks will grit their teeth) and the strip excised a LOT of the story, but its still a fun read. 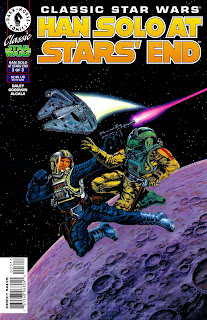 Han Solo at Stars' End is perfectly good space opera adventures. As a Star Wars story, its wickedly fun, fast, and action-packed and perfect for anybody looking for Scum and Villainy adventures. If I was making a chart, this is essential Expanded Universe reading material, smaller-scale than the Thrawn Trilogy, but just as satisfying.

Plus, Han launches a villain out of a space lock.